Originally published on the Global Rockstar Magazine on 01.04.2016 and if you don’t know Róisín Murphy (of Moloko’s memory) click here and you may remember.

Róisín Murphy is touring Europe with her brand new album Hairless Toys that was released in May 2015. It is her third solo album – after four albums with the duo Moloko that was active from 1994-2003. On November 13 she played in Vienna at MuseumsQuartier. I couldn’t miss the chance to ask Róisín Murphy some questions regarding the beginning of her career as a musician to be shared with the Global Rockstar community.

Imet Róisín backstage before the concert and was amazed at her normality… we chatted, we laughed, we interrupted each other during the interview and after the concert I went home with this thought: no matter what career path this woman chose, she would have been brilliant at anything remotely related to art!

Do you remember when you decided you wanted to make music for a living? Do you remember a turning point, the moment you realized – Hey, I can earn a living out of this!?
For me it was a little complicated because I didn’t really decide that’s what I want to do, I got sucked in it. Moloko started as a relationship and music thing at the same time – boyfriend and girlfriend, same night when we recorded music together – but I didn’t think I was making music, I was saying stupid stuff… everything I did has just been one sort of accident after another, really.

I think the major turning point was making my first solo album (NB Ruby Blue, 2005), because I…

Maybe also because you were so young?
Well, I was 19 when I started, I was getting closer to 30 when I finished with Moloko. It was also a wild splitting-up, Moloko had a wild finishing: the process of closing it lasted two to three years, we made an album (NB Statues, 2003, Moloko’s last album), we toured the album…

The real relief was when I finished Ruby Blue, it sort of ended a period of three to four years of uncertainty for me.

You were 19 when Tight Sweater, Moloko’s first album, came out. Was your young age an advantage?
Oh gosh, yeah! It would have been quite easy for me to get lost in the world that I was in. To have a reason, a focus for all us creative people to throw it all in… I was very, very lucky to find that career!

You decided to stay in UK at age 15 instead of moving back to Ireland, even before you started making music. Music was not part of the equation?
It was in a way! My family went back to Ireland and I didn’t want to go back to Ireland, they’re all into heavy metal and I just couldn’t bear it (NB Róisín laughs, then I laugh… there was a lot of laughing involved with this interview, actually).

Some places are better than others to build a career as a musician. Would you recommend to young artists who were born in a somehow unfavorable country or city to relocate to a better music scene as soon as possible?
Oh, I don’t know… great music can come from any place.

But I was lucky because I landed in Manchester and it was the end of the 80s and they really had some times in Manchester… we had Madchester, The Haçienda, The Stone Roses, Happy Mondays and all that Factory (NB Factory Records) stuff… it was a very vibrant musical scene.

You were also in the right setting for the kind of music that you make… who influenced who? I mean, do you make this kind of music because of the place where you started?
Yeah, maybe… Manchester was a big thing for me coming from a small town in Ireland. We moved to Manchester when I was 12 and for me it was perfect, just the perfect thing. My brother – he was older than me – was not so good, he missed his friends. But I was so ready for that bigger pond.

This keeping the artist image separated from your private life, it has pros and cons. Would you recommend it?
I don’t know if I do (NB have a separate image as an artist)… I mean, you see me now in my absolute scruffies… (NB it’s a t-shirt and yoga pants, btw, and to me it seems just right for someone who will be at make-up in a few and on stage in less than one hour).

I don’t feel it’s separated identities, it’s the same person, it’s me and it’s my taste, it’s my flamboyancy, my silhouette… mine! Just as much as everything else!

Can you go to Tesco undisturbed?
It’s brilliant because I walk out the street and if I don’t have the shoulder pads on nobody recognizes me … if they knew everybody would go “put on the bloody shoulder pads!”

But I’m not that famous anyway, maybe if I was really f-a-m-o-u-s…

We all know people who spend months, years in studio improving, filing and polishing songs that are already perfect. A lot of artists have a problem to press the big red button and saying – this is it, it’s finished! I’ve read that with your new album Hairless Toys this process was quite easy…
There wasn’t much stress about that at all working with Eddie (NB: Eddie Stevens, British composer and arranger who worked with Moloko and followed Róisín in her solo career). There was just knowing that it would be ok!

But with Eddie, we wouldn’t even have to say anything! We just knew, later on we will fix this and that but for now we just keep this, this and this. That’s how you keep the energy in the studio, it’s very important to get the energy actually down onto the tape. It’s very very very important, you don’t destroy that in any work of art, you’ve got to keep it alive, not overwork it.

You also have to do the math: what am I going to lose by fixing this?

Closing an album… there is always a lot of compromising involved. Are you 100% happy with Hairless Toys? How much did you compromise?
I could answer the question yes I’m 100% happy and also no, you can never be 100% happy with anything!

Hmm… I think I’m asking the wrong question for your mind setting! Is this ability to move on to new things your secret?
It’s not that I have a rule that we don’t overwork things, I don’t set a line and you can’t work past that. It depends on the moment, it depends on the situation. I’ve made records that were ridiculous… I mean, Statues, by Moloko, was insane! Fifty piece orchestra… mixing was a nightmare!

What is the correct way to pronounce your given name?
Ro-sheen [ɾˠoːˈʃiːnʲ]

Does it still disturb you?
A little bit. (NB giggles)

Well, thank you Ro-sheen!
Thank you, enjoy the show!

(NB we enjoyed the show very much!!) 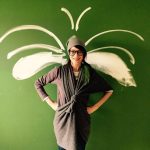 Next Post (n) DONOTS IN INTERVIEW - On their beginnings and the challenge, 20 years later, to sing in German